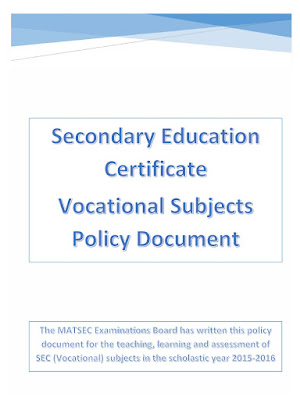 Click on the page above for a FREE copy.
Posted by Career Guidance Malta at 01:24 2 comments:


fewer dropouts from education and training


are below the 10% EU target for 2020. Conversely, in countries where VET lags behind, the dropout rate is higher than 10% – in some cases, significantly so.


The study also addresses lack of a commonly accepted definition of early leavers from VET. Data at EU level and in many countries do not track young people accurately as they leave and re-enter learning environments and/or the labour market.


According to the study, over 97% of early leavers are dropouts, with the remainder being young people who never start post-compulsory education and training. One in five dropouts eventually achieves upper secondary qualifications, with 77% doing so within three years.


The findings were discussed at an expert workshop organised by Cedefop in June. Cedefop


Director James Calleja pointed out that the early leaving problem is largely VET’s to solve: early leavers (aged 16 to 24) who return to education typically choose vocational options. He spoke of early leavers as ‘casualties of the education system’ whom public authorities have a responsibility to support.


Cedefop has launched a three-year project to address lack of data on early leaving from vocational pathways and to analyse the role VET plays in reducing dropout rates. Expert Irene Psifidou, who organised the workshop, said that the project is ‘ambitious but necessary: to develop tools that will make it possible for countries to monitor individual


learning pathways and to evaluate national policies on early leaving.’
Posted by Career Guidance Malta at 04:56 No comments:

Cedefop has just  celebrated its 40th anniversary. It is one of the first two European agencies, founded in 1975 together with Eurofound. Mr Lettmayr reflects on how Cedefop’s work has contributed to VET policies throughout this period:


fundamental principles of the Union, because it is the labour-market-related side of education,


which is a necessary condition for creating a unified labour market.


Ιn the beginning, Cedefop was more like an information platform.


It took a while before it established itself more closely as a support to European policy making, which has evolved, after the Lisbon strategy in 2000, in what we call an open method of coordination, meaning the wilful


has been and still is with them.


But, and I think this has been clearly underlined in the years of crisis, there is a paramount need


for closer cooperation and further development of a truly European system. Otherwise the economic  union will not work in the long run.’


In a drastically changing working environment, Mr Lettmayr believes there are particular challenges ahead for vocational education and training: ‘We have the influences of the whole IT


revolution, major trends like the ageing population or the need to develop our economies in regard


to sustainability, to make them greener, which impacts on jobs.


Then, there is a question which comes to the fore of the policy discussion more and more - the


distribution of income and wealth.

All this is drastically changing the working environment and the number and types of jobs available. It obviously has an impact on the skills and qualifications people will need in the future and on the way of living. The old paradigm of the information society and knowledge society with its constant need of updating knowledge and skills, meaning a  truly lifelong learning approach, becomes even more important.’


and, in particular, the Europea alliance for apprenticeships.  This is a subject close to the heart of the Centre’s Deputy Director:


‘The trend towards work-based learning is, to some extent, a correction of mistakes we have


made in the past. With the trend towards higher qualification levels we believed that we needed more school-based learning to send a higher proportion of the population to university, and have


forgotten a little bit that in the formative years, after 15 or 16, work-based learning and experi-


ence of real working life helps to teach people soft skills, which are very important for their employ-


ability. We are not trying now to revive any romantic and traditional form of apprenticeship. This


levels, which makes this trend so important and so interesting. It concerns not only those countries


that do not have a good apprenticeship system. Of course, for those countries the challenges


are bigger because they need to do a lot of institution-building and to change perceptions of the population, education providers and employers. But it also relates to countries which already have very good apprenticeship systems because they need to develop them and include the necessary


features which can respond to demands of the modern labour market. We are working very


closely with the Commission and many other institutions. Cedefop is particularly well-placed in this


context because member States trust the Centre to be a knowledgeable broker in monitoring and accompanying their efforts. I think we have a lot to contribute there.’


vocational education and training path: ‘I once talked to a man in a village who was taught to become a plumber. he was an intelligent man who could easily have gone to university. he said


to me about his choice: “I will have a job, the possibility to set up my own enterprise and I will be


independent.” VET is not second-rate education. It often corresponds much more to the talents


and inclinations of people and offers a lot of possibilities for professional development. In the end, you will be much happier doing something which corresponds to your talents, and if you do it well, you may get further in  life than with a university degree in a field of study that offers occupations which may not make you happy.’


Posted by Career Guidance Malta at 03:41 No comments:


There are wide differences between countries, both in terms of numbers of young people in initial VET and those that blend school and work-based learning.


In counties such as Belgium, the Czech Republic, Austria and Slovakia (see table) more than 70% of upper secondary students were in initial VET in 2012 - the highest rates in the EU. Other countries, such as Denmark with 46.1%, Germany (48.6%) and France (44.5%), are nearer to the European average.
In Denmark, however, almost all initial VET students are in some form of combined school and

This is not to say that teaching in school-based systems is not good quality, that students do not learn
practical things, or that they have worse job prospects. According to the latest data (from 2009),
the employment rate of initial VET graduates aged 20 to 34 in Belgium is 85%, one of the highest in Europe and some 11.2 percentage points higher than that for general education graduates of the same age. In France, the employment rate for vocational and general education graduates is about the same at
around 72%.
However, students in vocational learning without a strong work-based element may have less opportunity to acquire work-related skills that can improve their job-readiness.
There is also growing evidence that young people on high-quality apprenticeships and internships are
more likely to acquire useful skills and attitudes to find suitable work and that they have a smoother
transition to the labour market than general education graduates. Recognising these benefits, the European alliance for apprenticeships, launched by the European
Commission in July 2013, aims to improve the quality, supply and image of apprenticeships across the EU.
Some member States are already engaged in bilateral cooperation on VET reform, apprenticeships and apprentice mobility.
However, the success of extending combinations of school and work-based learning depends heavily
on employers’ commitment to provide opportunities.
Given that employers continue to stress the need for ‘soft’ skills such as teamwork, ability to adapt and to
continue to learn, all of which can benefit from having experience in the workplace, it is in their interest to
do so.

Posted by Career Guidance Malta at 02:15 No comments: